The Four Pillars of Secular Fundamentalism

The Four Pillars of Secular Fundamentalism

"Secularism is, in its way, a religion to itself, and it is a religion that cannot tolerate infidels or heretics" - Philosopher Edward Feser, The Last Superstition, p.2


Last year the story of a good friend of mine Nathan Sommers kicked off a six part series that I did on what I call Secular Fundamentalism. I believe that you should read the entire series which is linked at the bottom of this post.  Well as of Aug 6, 2014 there is an update. Here is a link to Fox News and an update to this story Federal Law Suit.  I reminded Nathan at his retirement ceremony that the Apostle Paul gave us an example to follow when he fought for his rights as a citizen of Rome by appealing to Caesar for the injustice that he faced:

Acts 25:8-11 "Then Paul made his defense: “I have done nothing wrong against the Jewish law or against the temple or against Caesar.” 9 Festus, wishing to do the Jews a favor, said to Paul, “Are you willing to go up to Jerusalem and stand trial before me there on these charges?” 10 Paul answered: “I am now standing before Caesar’s court, where I ought to be tried. I have not done any wrong to the Jews, as you yourself know very well. 11 If, however, I am guilty of doing anything deserving death, I do not refuse to die. But if the charges brought against me by these Jews are not true, no one has the right to hand me over to them. I appeal to Caesar!”


Those of you, who like me, love our military are used to hearing stories of FORTITUDE; i.e., courage, valor, honor, etc. In today’s US military there is a new application of this virtue that is needed by those who have conservative views, and Lord help you, Christian conservative views!!! Some of you may have heard the story of Master Sgt. Nathan Sommers, a decorated soloist for the US Army band who was recently reprimanded for openly holding Christian views in support of marriage and reading conservative books while waiting to sing.  I guess government diversity training forgot about the other diversity that is actually rooted in our constitution; namely, ideas!

You see you are supposed to shut up if your views conform to Christian orthodoxy in today's military where the only religion that is permitted to be openly orthodox is Secular Fundamentalism. Some of you may be saying to yourself: "Secular Fundamentalism? I never heard of that before". Oh, you have, and you are very well trained in its principles, trust me.  Where did you receive this training you ask?  It is all around you, but your main training ground is the modern University which has become a seminary of sorts for secular fundamentalism.

The misuse of the term Fundamentalist or Fundamentalism by the media is interesting in that their "new definition" of the term suits the modern Progressive quite well.  Let me explain. The term fundamentalist has its origins in the United States in the late 19th and early 20th century in opposition to Protestant Liberalism and secularism insisting, for example, on the inerrancy of Scripture. In other words being considered a fundamentalist was a good thing. However, today this term is a bad thing and is often used in the media and academia when speaking of those who adhere to a particular orthodox position and are “intolerant” of other views by insisting that their views alone are true. The point of using this term when referring to the secularist is to demonstrate that they themselves are in fact intolerant of opposing views and insist that their secular orthodox views are true. The secularist is even more intolerant and dogmatic with his or her views, while at the same time calling those who oppose their views as intolerant and dogmatic. The secularist even goes a step further by demanding that you hold their views or else! Thus we have the Secular Fundamentalist standing on his or her own absolute relativizing every other view.

What is interesting is the fact that we even find this secular definition of fundamentalist in a dictionary that I received in my college English class (yes I actually received a book back then): “A usually religious movement or point of view characterized by a return to fundamental principles, by rigid adherence to those principles, and often by intolerance of other views and opposition to secularism” So, according to the dictionary, which is supposed to be an objective reference, only those religious views outside of secularism are intolerant and require adherence. Luckily the on-line dictionary maintains the classical definition of fundamentalism--for now.

Friends, this new demand for adherence to one orthodoxy is extremely dangerous to all of our freedoms, including the freedoms of those that you may disagree with! You may even disagree with this post, but we are in a free country where debate is supposed to be open and protected. But unfortunately and increasingly it is not. As a matter of fact, have you noticed that the only speech that is considered "hate speech" is speech against Secularism's values?

Now we enter into the mystical part of the secularist religion. These new Gnostics act as if they have the 'secret knowledge' of every nonconformist's heart knowing that he or she must be a bigot because only the Secular Fundamenalist's one way of believing and loving is true. Disagree, then not only are you wrong, but hateful, so here come the flaming arrows of judgement, from those who are the first to say "you should not judge". The fundamentalist jumps up on his or her box of judgement and starts with step one name calling: "You __________!" "You are anti-___________!" Then step two; let the bullying begin! You must pay with your job, your finances, and worse--your good name!

How we have regressed in the 21st century where we have Islamic Fundamentalists blowing things up and taking the lives of "nonbelievers" around the world, and in a similar way we have the Secular Fundamentalists blowing the lives up of those who believe differently within Western Civilization. The good news though is that both liberals and conservatives dislike bullies!!! I say let's work together like real men of FORTITUDE and stop the bullies.

Nathan is a friend of mine and he is a wonderful man with a deep love for Jesus Christ, his family, and this great country. Secular Fundamentalism is the threat within the military that requires FORITUDE for dealing with our enemies "both foreign and domestic".  Who would of thought that we would see the domestic form in our day. Please visit http://www.militaryfreedom.org to stay informed and help!

I completed a series of posts on what Secular Fundamentalism is, its history, and how you will be able to see how much secularism shaped your own worldview.  Below you will find links to the whole series.  Enjoy and please pass it on via e-mail, or social media:  (Links below will be updated soon)

Part-1: "A Secular Religious Orthodoxy"
Part-2: "Pillar-1: A Dichotomy Between Faith & Reason"
Part-3: "Pillar-2: Evolution Is A Fact That Accounts For Origins"
Part-4: "Pillar-3: Miracles Are Impossible"
Part-5: "Pillar-4: God is Made in the Image of Man"

Building men of virtue in a culture of vice,
Peter P. Lackey, Jr.
www.amazon.com/author/peterlackey
Founder, Man's Ultimate Challenge
www.MansUltimateChallenge.org
"It is essential to a virtue to be about the difficult and the good" - Thomas Aquinas

1 John 2 False Positive: How can You Tell If You are A Christian?

In my class at Crossway Fellowship? Here is a link to the slides until there is a page on the Crossway page:  Being The Church In The W... 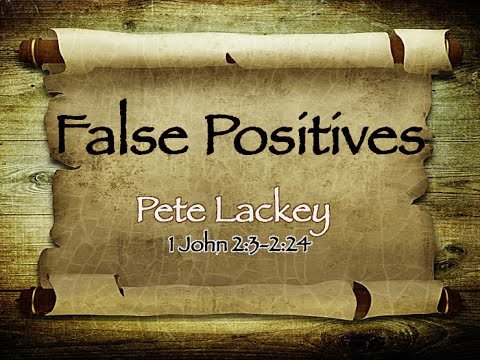